The Beginning: MCMXCV A.D.
In the mid 1990’s in the American Southwest, guitarist Charles (Chuck) Epperly and bassist Joseph von Heinl (Joe Boogie) connected through a former bandmate of Chuck’s to form a jazz-fusion cover band. A deep friendship developed between Chuck and Joe as they shared many similar musical tastes and the desire for their own creative outlets.  Their founding influences ranged from the Red Hot Chili Peppers, Beastie Boys, James Brown, and Parliament/Funkadelic.  Eventually the two artists embarked on an effort to create a new musical sound by forming an entirely new band.

In a short amount of time, the trio recruited another mutual friend, Brian Hacker and found their first live drummer, Brian Herrage through a newspaper classified posting.
​
As the band practices continued by alternating between Chuck’s parents and Joe’s mother’s garages, the band of five kept writing music for their first demo tape. Through discussions and debates about what the band should be called, they chose the band name “Dislocated Styles”. It resonated with the group and represented their diverse musical sound.
During this time Chuck was enrolled at Scottsdale Community College where he serendipitously was encountered by Greg Forney. Greg had just moved from NJ to AZ with a plan to attend ASU after graduating SCC and becoming an in-state student. As a 19 year old kid who just moved to the state with no friends, Greg overheard Chuck talking in a Wendy’s about his new band to the friend he was sitting with. Greg wasted no time walking up to the pair and introducing himself as a drummer/ keyboardist/ singer just looking for an opportunity to jam and hang with some new people as he was new to town. Chuck said they didn’t have a keyboard player so the two musicians exchanged numbers.

Greg was invited to come to a band rehearsal at Chuck’’s parents. Armed with a keyboard and the same creative energy as the other five members, an immediate synergy was recognized. The addition of Greg’s keyboard and percussion added the final piece for what would become the Dislocated Styles sound.
​
A Band of Six:

Now a band of six members, Dislocated Styles forged ahead with their plan to release a demo tape and begin booking live performances. Joe booked their first show on a pre-sale contingency basis at The Mason Jar, in Central Phoenix, AZ. The band oversold their allotted pre-sale tickets and were received favorably by their peers. The club’s owner was impressed and asked them to return, which the band obliged on occasion. With a live performance under their belt, Joe began contacting other local music venues and connected with the owner of the famed Electric Ballroom in Tempe, AZ. Again on a pre-sale ticket contingency, the band exceeded expectations and performed to a full house on a Wednesday night. The following day, the Electric Ballroom owner called and asked if the band would open the following Saturday in the much larger amphitheater room of the Electric Ballroom. This was many of the opportunities the band would encounter over their career. The amphitheater of the Electric Ballroom was a legendary venue, hosting such acts as Prince, 311, and Bootsy Collins. The band continued to exceed promoters expectations by drawing large crowds and the significant stage presence with the high energy of six musicians.

As the live shows grew in popularity, the need for new material and a demo was in their immediate sights. Joe had developed enough familiarity with recording equipment that the band would record wherever they could find space to set up. This included a hotel near Scottsdale Airport where Chuck and Joe worked during night shifts, Joe’s apartment and the Scottsdale Community College Recording Studio. 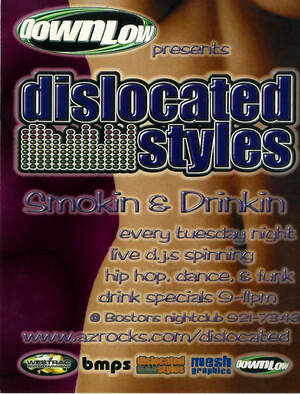 Dislocated Styles first residency at Boston's Nightclub in Tempe, AZ.
Boston's Nightclub, Tempe, AZ: Tuesday nights
In the winter of 1996, the group was offered an opportunity to play the legendary nightclub, Boston’s in Tempe, AZ. The club's Owner Al Nichols needed a band to replace the standing Tuesday night show by fellow local group, Fred Green. Fred Green had helped make Boston’s a steady event on Tuesday nights and it would be Dislocated Styles responsibility to keep the weeknight turnout attendance high for the establishment. Dislocated Styles rebranded the show by calling it “Smoking and Drinking on a Tuesday Night”, in a nod to the famous Beastie Boys song lyrics.  Al Nichols and his sons were always professional and supportive of the band.

The band kicked off their weekly Tuesday night Boston’s in-residence shows in January of 1996 to a nearly sold out crowd. Promoting the show to college students of ASU in Tempe, proved to help bring in crowds week over week to see the band perform. It also increased the band's devout fans at concerts elsewhere in AZ.

By having a standing weekly gig, the band would continue to increase their exposure and use the opportunity to play new songs to their growing audience.
Preparing the First Album:
With the weekly Tuesday night show and weekend gigs booked regularly, the band continued to write new material for a debut CD Album. Industry contacts were being established and the band met recording studio owner Larry Elyea of Mind’s Eye Digital, who had recorded Fred Green and Jimmy Eat World amongst many other popular bands in in the Southwest.

Joe and Greg became roommates at the time and set up a pre-production studio in their Phoenix apartment to begin writing the music for the first album. Entrepreneur and family friend, Rob Miller, invested in the band's efforts for the recording studio time, which Joe booked dates with Larry Elyea. With a clear plan and songs in place, the band recorded most of the first album’s music tracks in a single evening session.

The lyrics, samples and vocal arrangements were subsequently finished in the remaining sessions. Chris Peeler from Fred Green along with DJ Radar of the famed “Bombshelter DJ’s”, contributed to the album's unique musical output.

The band was making contacts with others in the media and production circles, and had been offered to shoot a music video for their song “Organized Rhymes” and connected with Tempe area native JoJo Huerta. JoJo was instrumental in helping network and promote the band's growing popularity at the clubs and bars in AZ.
​
With an ample following and a solid steady stream of record sales, the band was beginning to get noticed outside of Arizona.
With the help of respected promoter and local businessman Steve “Pops” Adelman, the band began booking regional tours taking them to Southern California and Tucson. Mr. Adelman booked the band with the AZ native and national act, the Phunk Junkeez, Incubus and Alien Ant Farm on multiple shows including the world renowned Hollywood venue “The Roxy”. More shows with national acts began to happen including concerts with Fishbone, Snot, HeadPE.
​
Around this time, original drummer Brian Herrage had departed from the group and Todd Sonnenberg  became the new drummer.
Preparing The Follow Up Album:
After making good on the first album’s return to investor Rob, Joe secured a new investment with him to record the band's follow up album. Rob and Carol Miller were instrumental in supporting the band's efforts. This time, the band would record and release a full-length album. In addition to the band releasing new music for their fans, a secondary goal of the new album was to have the band shopped to major record labels. The new album would be the calling card into building major label interest for the group.

The initial songwriting and pre-production sessions took place at Joe’s home studio in mid 1997 and the band again enlisted the record engineering of Larry Elyea and recorded at the new Mind's Eye Digital. With a album song list of nearly 15 songs and incorporating guest appearances, this new album would require more recording time. It was also during this time that the group welcomed Jason Dubree as the second MC to fill the void left by the departure of Brian Hacker. Todd Sonnenberg also departed the band and local session drummer Dave Gamboa joined the group to finish the record.

The band was playing almost every week with a highlight to play the local pop radio station (Power 92.3FM) festival with Grammy winning artist Coolio, in Puerto Penasco, Mexico during Labor Day Weekend of 1997.

Big Break:
Local entrepreneur, Leon Saja, introduced the band to Bruce Lorfel, of Eternal Artists who was the architect of the famous million dollar record deal between Insane Clown Posse (ICP) and Disney owned record label “Hollywood Records”. The band agreed to a management contract with Eternal Artists and released “Elevator Music”. Bruce and Beth Milosevich went to work shopping the album to major record labels for a deal.
​
Shortly thereafter, Bruce Lorfel arranged for many “showcase” shows for the record labels, they included Hollywood Records (Disney), Capitol Records, American Records, Atlantic and others. The national act Papa Roach opened for the band during a showcase for Capitol Records. Out of all the AR & Label meetings, Kevin Estrada of Roadrunner Records (now part of Warner Music Group) was an outlier that developed an instant rapport with the band. Kevin arranged for an up and coming producer, Howard Benson to fly out and meet with the group. Howard had worked with many respected musicians including mainstream artists POD and was nominated for a Grammy for his work with heavy metal band MÖTORHEAD”.

The band signed with Roadrunner Records at the end of 1999 and made plans to record in Hollywood, CA beginning in May of 2000.
​
The band had parted ways with drummer Dave Gamboa before signing the recording contract. As a result, the band contracted drummer George Robbins of Bionic Jive to spend two weeks in California recording the drum tracks for the Roadrunner album.
Producer Howard Benson enlisted the famed Motown engineer, Bobby Brooks to run the complicated process of making the album. The group used a combination of both analog 2” recording reels and the cutting edge digital software to develop and capture the songs into a major label debut.
​
With the expansive size of the The Gallery studio, the band recorded in a wide variety of rooms and corridors. George recorded his drums in a stairwell that enclosed his drum kit with an mounted patio umbrella and carefully positioned microphones. Greg recorded some of his keyboard parts in home’s indoor racquetball court using a Hammond B3 organ.
Towards the end of 2000, Joe decided to leave the band to pursue other professional interests. The band recruited local famed bassist, Lance Grant to replace Joe and prepare for the touring demands post album release.

Pin The Tail On The Honkey, was released globally by Roadrunner Records in the Spring of 2001, and followed with plans for a lengthy worldwide tour. Of international locations, the band played the famous Reading-Leeds Festival in England which attendance can be nearly 100,000 people. The Lowlands Festival in the Netherlands, and Pukkelpop Festival in Belgium. The band was also booked for multiple shows in Japan. In total, the band has played in nearly ten different countries, spanning over three continents throughout the world.

Dislocated Styles found itself in a unique period of time within the multi-billion dollar Recording Industry, as the emergence of streaming, in the form of freely pirated music cut nearly 20% of revenues in 2001.

To date, Dislocated Styles songs have been played and/or streamed over five million times, worldwide.